Last weekend, I co-organised a trilingual forest retreat weekend in Nagano, Japan I helped to organize. Yes, trilingual 😃. At some point I was mixing Japanese, Spanish and English 😅. On the program we had wood weaving, yoga, core tuning, hot bath (onsen) and the forest therapy session – which I guided. We stayed in a 200 year old wooden house. Japanese style in the countryside. It has an irori, a sunk fire pit in the wooden floor. In this blog I will share some impressions about wood weaving and forest bathing.

Hinoki is one of the most elegant types of wood in Japan. This tree is a type of cypress that is considered sacred and only grows in this part of the world. Hinoki has been used since ancient times in Japan as a construction material to build temples and shrines and is considered as one of the 5 “forbidden woods” in the time of samurai. You could lose your hand or head if you cut down this wood. In other blogs I wrote (indirectly) about hinoki wood and the sustainable silviculture practices introduced by samurai in the 17th century:

It is not only the durability that makes this wood amazing. Yes, some constructions made from this wood are more than thousand years old, like the Horyuji temple, the oldest wooden structure in the world. What I like the most about hinoki, is the scent. Even after some years you can smell the scent. Another application is to make strips of it, and weave it according to some patterns into hats, baskets and other useful stuff. Last Saturday afternoon, somewhere in Tsumago (Nagano), with the help of patient professionals, we made coasters. It was quite therapeutic, to use your hands, and focus on the patterns for 1,5 hour. 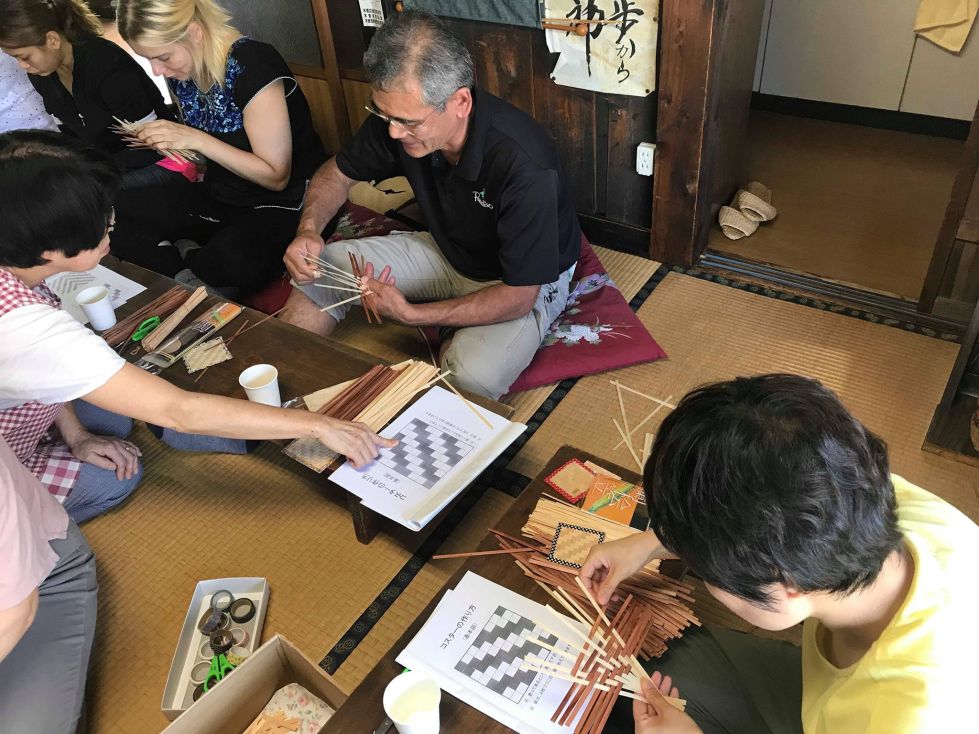 Forest bathing in a gorge

On Sunday morning it was my task to wake up everyone at 05.30 to do a silent walk next to the river. I asked them to leave their phones and cameras (but I took mine to take some photographs in the end, although I also felt difficulty in the beginning to not take my camera and look for “good pictures” instead of looking for the nature in myself).

First we sat in a circle at the entrance of a path, and I explained them some differences between Japanese forest bathing and western school of forest therapy. I told them that for me forest bathing is not the same as meditation, but more about finding pleasure. We will open up our senses to feel sensuality. I told them to listen -like elephants- and observe – as owls- for five minutes, and then to share one thing they  noticed and how it made them feel inside. After this exercise I asked them to be silent from the moment we will enter the forest. It felt like we entered one of the magical forests depicted in the Japanese popular anime movies from Miyazaki, like “My Neighbour Totoro”.

Some people expressed they felt very nostalgic to a connection they had with nature when they were a child. Someone admired the resilience of trees, even in a landslide we passed, and that she wants to be more like this. Another participant felt the suffer of a tree when she touched its trunk. Forest therapy is not always about getting “good feelings”. It is about restoring the relationship between nature outside us and the nature in ourselves. And then we see we have been bad to trees, rivers and nature. For me, forest bathing is also a way of environmental activism. 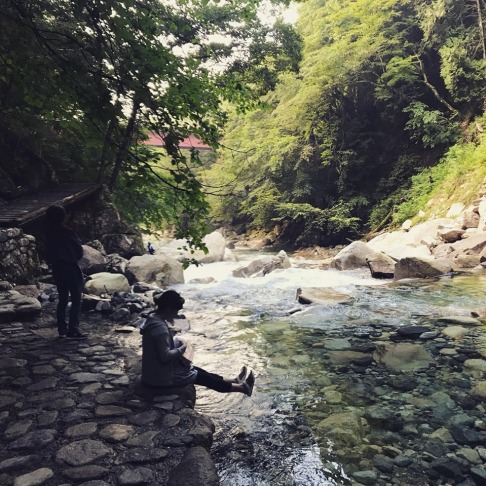 At 07.00am we were back in the 200 year old house where we stayed, to share corn tea from a Mexican friend who stayed behind to put away the futons and prepare the meal. After a breakfast, I hold a second session where the participants were invited to go back into nature and create art, like a collage of things they found, a haiku or a song. Our youngest participant made a haiku about how the moon and the stars became friends. 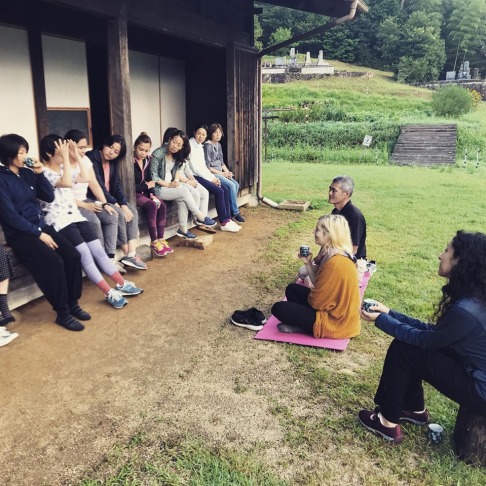 It was a beautiful weekend. I am grateful.

This is the poem I wrote during my own forest therapy:

When the sun invites the moon,

I hear the drums of the forest.

The colours start to dance to it’s swan song .

too busy during the day. Only time for an embrace,

when the sun invites the moon.

The colours fade away. My heart beat stops.

I only breathe when I listen.

I will leave soon Japan for three months, for a training in Colorado and data collection and other projects in Belgium and Sweden.

However, in late autumn, when the trees in Kyoto color deep red, I will return and plan more moments of forest therapy. If you are in Central-Japan, and like to hang out with international company (trees and humans), send me a message of contact me through Instagram: https://www.instagram.com/wereldwoude_verhalen/.