For some reason, I start to connect forest bathing experiences with fairytales. Last month, for instance, I got a Russian fairytale experience during a forest bath in Norway . Since a week I am back in Japan, the country that let me realise why we need feminists. And ironically, or not, Snow White elements infused the first forest therapy bath I was guiding – not the most feminist fairytale- as if it had to let me reflect what kind of medicine I can give to some people in Japan . I am not surprised to connect forest therapy with fairytales; both journeys happen mostly in a forest. There is something there that let us teach something we need.

Snow White was never really my favourite fairytale. I could never really connect with the princess I got to know because of Disney’s adaptation from 1937.  Disney’s first length animated production was an adaptation of a Grimm’s  fairytale to fit the values of 1930s in North-America. Snow White, when you thought about, was representing this ideal of a beautiful, obedient and helpless woman, who also likes to clean. This is not me. In some way, I might feel more connected with the “evil queen”, who was successful, powerful and actually also beautiful. The message of the story is also a bit like this:

Even more, the movie introduces Grumpy as a woman hating man who thinks are women are evil, and does not make the nicest comments about women.  Happily, gender roles are constantly being changed and reassigned with each passing decade. Nowadays we see retellings or more modern adaptations which decide to to keep their female protagonists fully clothed and powerful. One such film is Rupert Sander’s Snow White and the Huntsman (2012). An interesting blog about the differences between both versions can be read here.

However, in Japan, I feel they still are attached to the 1937 version. Currently, my university organises 16 days of activism around gender equality and organises different events. One event was a talk about the support system and its challenges for rape victims in Japan. You learn that domestic violence technically is not considered to be rape, according to the very outdated laws on sexual harassment in Japan. I think the last update was 1923, even before the movie came out.

The Forest Bath Preparation: When the Forest looks unknown and dark

Although I organised a forest bath in Japan before (in August, in the Japanese Alps), this would be the first forest bath according to the ANFT methods. I wanted to organize one in Nagoya itself, and after a small inquiry, someone told me about a park which feels like a forest. “There they do not do that much maintenance work as in other parks.” It sounded promising… until this friend added there were rumors about “mamushi“. Vipers. When I entered that forest, I could hear them everywhere. I made big noise with my feet in the crispy autumn leaves, to warn them, you know them, and I felt a bit anxious. The forest felt a bit dark. Also, I could still hear the sound of children and humans, and did not “feel it”…

And then I got to know the daurian redstarts (or in Japanese: Jobitaki). First I heard these winter birds… and then I saw them! These birds are not shy for humans and to my delight they came closer and said hello to me. The forest changed its face and my anxiety was the one who ran away.

The jobitaki are migratory birds. In winter they are in Japan. Some of them stay in Russia during the summer. They make amazing songs. I decided to organise my forest bath around this spot. It was again “too easy” to find a good forest bath location. Following your guts really helps me to save time.

The next morning, before I was going to meet my participants, I wrote an invitation in honour of them which is about understanding your inner compass. Most participants were also migrants, like me, and Japan is not an easy country for foreigners. Our roots are colored, but being away it makes us more confused. Being in touch with your inner compass is important.

Finding an abandoned place and relaxing

Still, I decided to explore the environment a bit more, and I encountered this abandoned memorial which was overgrown by plants and of which some parts were corroded. The maples had vibrant red colors, like the lips of Snow White. 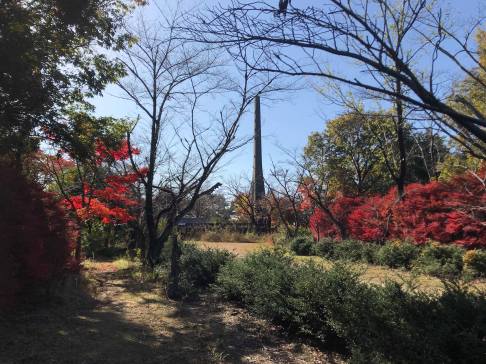 I was a bit confused to see flowers and autumn leaves at the same time, and wondered if nature was also getting confused because of the human activities induces climate change. The place had something sad. I did not decide to bring participants there, but during my exploration I took the time to draw the jobitaki in my sketch book and observe its movements.

The 7 Dwarfs in Japan

In this forest bath, I guided 7 participants. When I wrote later an Instagram post about this forest bath, I almost wrote 7 dwarfs 😁, and maybe one was a bit more Grumpy, as he did not like to wake up early on a Sunday morning, but he did not make mean remarks about women. Perhaps, because most dwarfs, I mean participants 😁, were women. Also later, I realised I was the only ‘white’ participant, so the Snow White and the 7 Dwarfs metaphor came.

The 7 participants tuned at different pace in the energy of the forest. I like listening to their stories how they reflected about rules in Japanese society or ideas of what is clean and what is not, or that apparently when beings are in the forest it is ok, but not when they are in the kitchen. Later, when I reflected personally on my own, I thought it was interesting how the Confucian system of putting a hierarchy and order (and also a place) to everything in the more-than-human-world came back.

After one third of the forest both, I did not see the daurian redstarts where I had seen the day before and was a bit disappointed… for some minutes. I decided to sit and wait for the participants and … it were the birds who arrived as first.

They were the best partners in this forest therapy session. I put some seeds and nuts for them, and they picked it up during the last sharing circle.  I decided not to pluck any teaplant in the forest, as it is still a new being to me and I do not want to risk my participants. Therefore I decided to give them hot chocolate and cookies from my country that I had brought with me. They were very happy to get this. A leaf 🍁 fell in the cup with less hot chocolate  I was preparing to offer to the forest itself. A lucky shot? Or was that Japanese forest being not so patient and telling me “ I really wanna have that Belgian hot chocolate too!” 😉 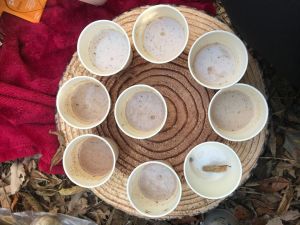 … and the apple in the end

To my surprise, some participants brought also some gifts to snack on. And of course… one of the snacks were apples. Happily there were not poisoned. An apple is by the way symbol of beauty, and in my opinion it is no surprise that this symbol appears in the Snow White story. 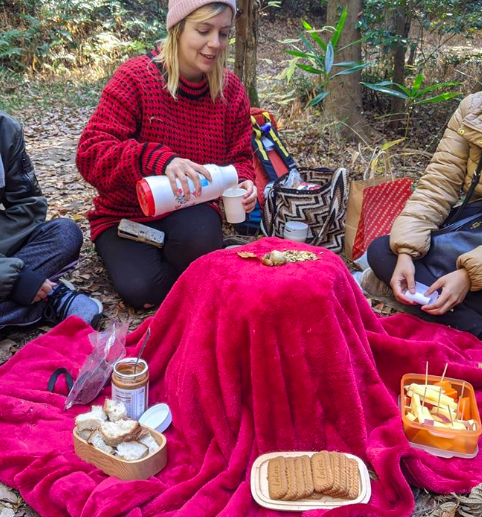 Currently I am writing this blog in the Gender Research Library of Nagoya University and wonder what could be my gift to Japan, in the last months I am here, especially after watching the Belgian documentary about “the Man Who Mends Women“: Dr Denis Mukwege. (And yes, I wondered why did I not hear about a Belgian documentary  when I was there?)

Since many years I am also interested in ecofeminism (I also wrote here a blog once about it: Ecofeminism in 2019)  and see also many parallels between how many women and nature are suppressed and exploited by a certain elite. I think how projects with positive and creative energy can help transform especially victims, or maybe even repair the broken ties in our culture that let people dominate others in often very gruesome ways. I am studying ecolinguistics which I also explained in these three blogs:

Ecolinguistics tells how language contributes to making or mending these broken ties. Ecofeminism can even use ecolinguistics to inspire women to fight for themselves and nature. This recent article in the Irish Times explains how Irish myth and folklore can inspire women to fight for ecological change. My first fiction book “Als Meubels Konden Spreken” is also a retelling of a Russian fairytale, where I integrate ideas about circular economy in the coming of age of a young woman, finding her roots back.

From Snow White to Amaterasu

Last July, I gave already a presentation about ecofeminism at Nagoya University. Now, after the Snow White Forest Bath, I asked students of the HeForSheClub at Nagoya University if they would be happy to think together how maybe Japanese mythology and folklore can activate women in japan to fight for gender and ecological change. Also because these feminist students talk a lot about rape issues (and lack of strong legal framework in Japan to combat this), I had to think about the myth of Amaterasu, who also got raped, ran away and hide herself in the cave (and was silenced). She eventually came out again – partly because of another female being who used some humor.  I asked the students to discuss ecofeminism and the use of positive retelling, and maybe at the end of a forest bath.

This will be continued … for sure!