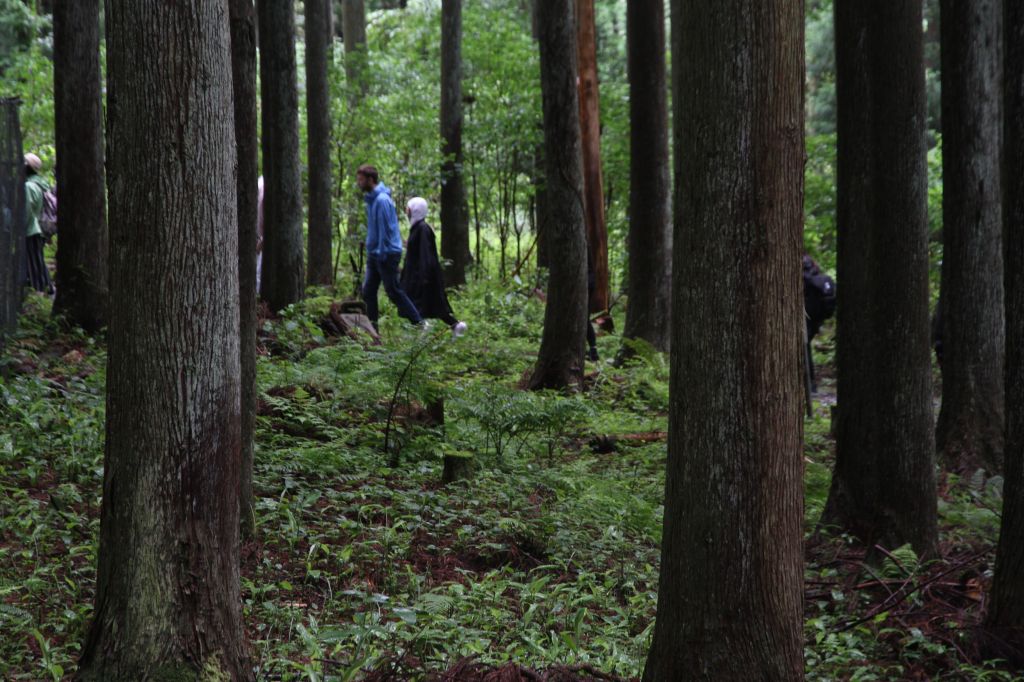 Several weeks ago I experienced a first forest bath in one of the 62 certified forest therapy bases in Japan. You can read and see photographs in this blog: Forest therapy Taking Root. What I did not mention, was that we were… not alone.

Two days before, the facility staff of the center told us to wear long sleeves, long pants and long socks that can cover the bottoms of the pants … because there will be hill worms that suck blood. It sounds more horrible than it was. In the end, the stress hormones of most participants decreased, despite the presence of these animals. You could also see who were the city dwellers and who were more used to bugs. I also brought one of my best friends. He comes from another large forest civilization like Japan, but with a much lower population density. He was showing me  as a happy child on discovery every time a worm on the top of his umbrella or shoe, while others around us were removing the worms of their shoes with sticks, as if it was a curse.

Actually, later I realised; when I reflected more with my Norwegian friend and one of the two Japanese forest therapy guides; that the worms are actually a good departure point to talk about “human control of nature”.

For a Flemish person it is striking that Japan is a real forest civilization. Even though the Japanese are twelve times as many as the Belgians, the population density is about the same. However, our country is not even 20% forested, while Japan is two-thirds forested. It may be one of the most populous countries in the world, but Japan is also one of the greenest, with a great diversity of trees. One of my research projects also regularly takes me to the countryside north of Nagoya, where I learned more about the fragrant cypress trees and forest culture and management from local experts over the past year and a half. My own professor is also interested in a “lignification” of the Japanese cities. Environmental egineers here talk about carbon storage and absorption of young trees, about the effect of trees in cities on thermal comfort and the subjective perception of temperature, the regulation of water management, reducing risk for landslides and erosion and other things. Forests are so important, and although I focus here mostly on cultural values and effects on mental health, as an environmental scientist I can give so many reasons why it is also good for the planetary health (and also for us). Trees are also central to Shintoism, their indigenous religion, and you often see how much respect they have for all their nature.

Since the 17th century there have been strict regulations on forestry and forest management. In the times of the samurai these were so strict that if you cut down certain trees in the Kiso valley (north of Nagoya) you even risked the death penalty. “A head for each felled tree, an arm for a broken branch,” that was the punishment. These trees were destined for the houses and temples of powerful families, or Buddha statues.

On the other hand, when I moved to Japan, I thought I would learn a lot about sustainable practices in environment, but how longer I am in Japan, how more confused I am. My Norwegian friend had also similar confused feelings as I had two years ago, and we found ourselves talking a lot about control of nature (and princess Mononoke).

In Norway it is quite normal to spend a lot of time in nature. My Norwegian friend explained to me that as early as the 19th century the urban working class in his country was encouraged to take the train to the woods every Sunday because, like the Japanese, they also had that intuitive knowledge that living in nature is good for you. But he was also a bit sceptical about all rules and procedures (for which Japanese are known) and did not like it that we were in a big group of more than 20. He is the kind of guy that enjoys the woods in silence, preferably alone. I have to agree that I also enjoy being in the forest on my own, or with people that make me feel comfortable. There is a poem of Mary Oliver which explains forest bathing how he and I enjoy it the most:

During his flight to Japan, an article in the Norwegian media about the trend of forest baths also caught his attention. The Norwegian journalist thought that forest baths meant “simply swimming in a lake”. After my explanation he already said that he already automatically takes forest bathes every week.

“But do you open all your five senses?” I asked him, because I knew from experience that he had a rather high walking pace, and when it comes to forest baths, it’s all about moving through a forest as slowly and consciously as possible.
“Yes, it’s normal for us to touch leaves, rest our backs against a tree, smell pine needles and so on… I just do not need rules like the Japanese do. ”

He did admit that forest baths are effective for urban dwellers, and that the role of nature people like him and me is to get city dwellers into the wild every week. He is pleased that Japanese city dwellers travel to the forest every week, but he also shared reflections on nature conservation and how sorry he thought it was that many places were too easily accessible for many people. He noted that too many mountains in Japan had a cable car. That day, he and I had been traveling for two weeks and did a lot of hiking, trekking and camping; from Hokkaido’s national parks to Mt Fuji. Many times he had remarked how much Japanese try “to control the mountain to make it accessible for everyone”.

He understood that access to nature must be a human right. “But not all nature should be accessible for everyone, because some places are dangerous for people who think they can climb a mountain with sandals, or who don’t realize that they need a guide or know what should be in a day backpack.  This results in blogs which say that for example Mt Fuji is tough. But Mt Fuji was not a difficult mountain at all. Now I understood they just were not in good shape and, or they did not bring the right gear, because they do not take the effort to get some outdoor skills and knowledge.”

We agreed that being nature is about understanding limits. Not only of ourselves, but also of nature. We have to respect that every place has a carrying capacity, and we have to not underestimate ourselves, especially in nature.

Nowadays, these worms are there almost whole year, one of the forest therapy guides told us. During the allocation of this forest therapy base, these worms were not there, but then this was also a godforsaken place. Now animals from higher up bring these leeches when to go down; to this place in search of food, because man has reduced their territory. “There is a reason why Ghibli Studio choose these worms for princess Mononoke. It are always animals from higher up, from more remote areas, losing territory, that bring this curse to the human world.”

For those who have seen the popular animated film “Princess Mononoke”, recognizes that animals also came from the mountains and were possessed by these demonic worms squirming over their whole body. In this movie, the toxic used by some colonising humans causes the curse. In the beginning of the movie, one of the main characters get infected by this curse when he protects his village against a possessed animal. The movie is about his search to find a cure, but in the meantime he also learns more about forest spirits, wolves and the impact of the colonisation of nature.

This animation movie inspired me so many years ago to visit Japan, and stay there for some time, to reflect about the relationship between nature and culture, the impact of civil and environmental engineering. For me, I got maybe too excited about these worms, or curse spirits, but partly because it closes a circle for me.

I met the worms. I saw in the past two years very confusing images of infrastructure that let me wonder… why do we keep building (especially in a country which society is shrinking?). I know jobs have to be created, that accessibility is a human right … but sometimes it is good to rest.

What do you think?