Once upon a time, Japanese society was more a forest civilisation than nowadays. People used the wood to build castles, temples and houses, or made bowls, cutlery and furniture. Today, most Japanese no longer live in castle towns and cities surrounded by forests, but in megacities such as Tokyo, Yokohama, Osaka and Nagoya. As a result, they no longer come into contact with the roots of their culture and nature. Especially in Tokyo, the overcrowded daily life is also a headache for millions of people.

Some have probably already seen videos about the overcrowded trains and subways, in which pushers with white gloves push the last passengers into a wagon. The Japanese call this the commuter hell or ‘tsukin jigokin’. There’s also ‘karoshi’, which means overwork suicide.

I myself also wrestle with this culture of many working hours. I only try to work for forty hours, but I also feel feelings of guilt when I leave the laboratory at seven o’clock and see that my colleagues are still at work. Most of my Japanese friends work seventy hours a week.

Japanese companies also do not indicate all hours, such as transport from the company to an assignment on the field, otherwise the statistics of overtime would be a bit too high. Since 2014, the government has been trying to change this by means of a law, but the Japanese are not getting the highest points for quick changes. What I also hear, as excuse from workers itself,  is that overwork happens because to to lacking skills from their side, being “not trained” enough and need to be more familiar with the job, or because they think they are irreplaceable and cannot let their company down.  Japanese people are very bad in “resting” or “quitting”, even if something seems it is not good. According to some scholars, it’s in their “culture”. There is even a story that when it was clear they would not won the second world war but they did not surrendered, a high positioned man said with a big sigh: “We do not know how to quit.” 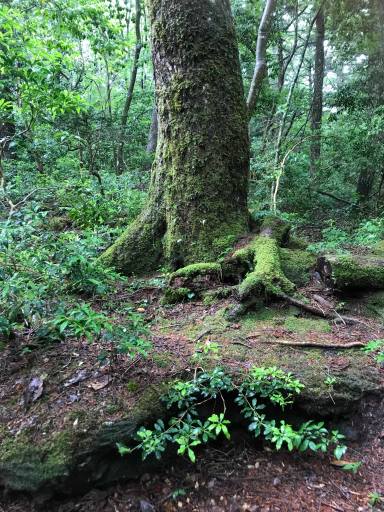 Aokigahara is  the most ‘popular’ place in Japan to commit suicide. The day before I organised the forest therapy expedition, I visited this forest at the foot of Mount Fuji, with my Norwegian and a Thai friend. Because of the volcanic soil the trees have a very strange shape, which looks like they can walk.

Along the way, we saw that someone had put a package of flowers on a rock. We stopped for a while and wondered. The site’s popularity for suicide has been attributed to Seichō Matsumoto’s 1961 novel Nami no Tō (Tower of Waves). However, the history of suicide in Aokigahara predates the novel’s publication, and the place has long been associated with death; ubasute may have been practiced there into the nineteenth century: elderly were carried in the woods to die here, a more cruel version of euthanasia. Although they do not publish numbers of how many people die here every year to stop the association with suicide (and discourage), the last recordings say they find here annually 100-200 people.

After I told the guesthouse owner that I am into forest therapy, he recommended me to visit Aokigahara. He told me that this forest is very enchanting and a walk can be very therapeutic. I was a bit surprised, because I knew this forest already, as the suicide forest, and also I have been there 2,5 years ago, during my first holiday to Japan, with my brother. Actually, my first novel (sorry, only in Dutch, will be released in couple of months), starts in Aokigahara and is based on my first visit back in the winter of 2016-2017. I still remember my brother and I had not a good feeling about this forest. There was almost no sound when we stopped walking and listened. It was very eerie and we were both sensitive to the negative energy around us. Hence, my brother and I decided to leave the forest as soon as possible.

This second time was different. Maybe because I was there with a Norwegian guy who is very cynical about these kind of things. Maybe because I was in another phase of my life. In forest therapy, not the “guide” but the forest is seen as the therapist. Often, when we look for flows in nature, to synchronise with our own flows in our body, like our blood pulse, we look into a mirror. 2,5 years ago I was still new to Asia, but now it is already 3 years ago I live (most of the time) in Asia. I found a lot of time to develop myself and deal with my anxieties. I notice it in the way how I cope with failure, broken hearts, constant changes in spaces, apartments, job projects and people around me. It is different than some years ago. Or let me quote the brilliant  Hannah Arendt :

“Loving life is easy when you are abroad. Where no one knows you and you hold your life in your hands all alone, you are more master of yourself than at any other time”

We walked for like 40 minutes and did not exchange many words. It was raining a bit, and I also wanted some time to think and actually find strengths and arguments to enhance my resilience. As I mentioned before, I still feel guilty that I “do not do more” in the domain of work, about actually that I have a more healthy work-life balance than most of my colleagues here. But walking here, and reflecting upon what dark things these trees have witnessed, reaffirmed that being enough time in nature is good for us. 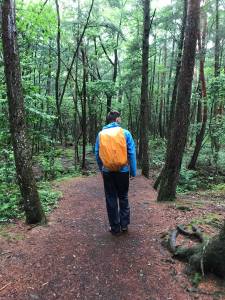 Later, during the walk, it seemed my Norwegian friend and I were observing the same things. I had taken a pictures of birch wood that looked like they were chopped and put next to the road to rot there. Only birchwood. Later I wrote it down in my journal: It seemed all birch trees where the ones who died first. What got them killed? Why birch trees? I took also a photo, because I want to remind myself to figure out why this was the case.

I had not noticed that 2,5 years ago, but then I also did not know the title of my book was going to be “Berkensap” (In English: Birch Water). My Norwegian friend asked me if there was a Japanese custom about birchwood. Norwegians, especially rural woodsmen like him, do have a cultural connection with birch, but yes, I had to disappoint him. Afterwards I did a short search on the internet, but the search was fruitless. If you know the reason why, please let me know in a comment.

The forest has an historical reputation as a home to yūrei: ghosts of the dead in Japanese mythology. Like wisps, they lure passers-by off the path. Because of the magnetic bottom your compass doesn’t work and the density of the trees, passengers can easily get lost. My Thai friend comes also from a culture where spirits inhabit their horror stories and folklore (read this blog about Thailand for more insights), but before we entered the forest, she was not scared. Her comment:

“The ghosts talk Japanese, so it is ok. I do not understand them.” 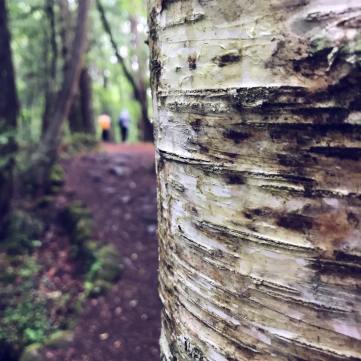 Parts of this blog come from my article for a Belgian magazine. I translated and adapted them: https://www.mo.be/zeronaut/bosbaden-op-samoeraipaden