On 8 May 2020 we, in Europe, celebrate 75 years of victory over fascism. Victory in Europe Day, generally known as VE Day or V-E Day, is a day celebrating the formal acceptance by the Allies of World War II of Nazi Germany’s unconditional surrender of its armed forces on Tuesday, 8 May 1945, marking the end of World War II in Europe. Today I remembered a book which is waiting in my bookshelf for some time. We talk about 6-7 years. The title? “The Green and the Brown” by Dr Frank Uekoetter. I bought if after I remembered an university excursion to Germany I did in 2010, where I and fellow social geography undergraduate students learned the meaning behind Heimat, Lebensraum and Naturdenkmal (difficult to translate), and the idea of “Blut und Boden” (Blood and soil, this is easier to translate). I found the book and read the first chapter. As it is VE-day I like to write a bit about a disturbing part of the history of nature conservation, as a small reminder that ‘isolation’ and focus on your own country is ok in some extent, but not if the ideas become too brown.

From ‘Boden’ to ‘Heimat’

‘Blut und Boden’ is a nationalist slogan expressing Nazi Germany’s ideal of a “racially” defined national body (“blood”) united with a settlement area (“soil”). The idea of ‘heimat’ or the ‘settlement area’ is in my mind for some time. The corona measures let us realize we might have to explore our own region or country this summer. In Belgium, we get encouraged to eat more potatoes, because there is an oversupply as a result of the closure of festivals and ‘frietkotten’. Even BBC wrote about it. A Belgian famous television maker who is making amazing travel documentaries in whole the world is doing a call to collect ideas about Flanders for the next season. He wants to rediscover our place. The Germans have a beautiful word ‘Heimat‘, which is also a Dutch word, but I have the feeling that the ‘meaning’ and ‘associations’ are more profound in German-speaking areas than in Dutch-speaking areas. Heimat alludes to a place in determined size where one feels home, often (but not necessarily) Heimat alludes to a home region. There are also romantic associations with coziness. But yes, it can also be connected with nazi ideology, so it is a very loaded German word. In Dutch, the use of the word ‘heimat’ would let others think you are old-fashioned. 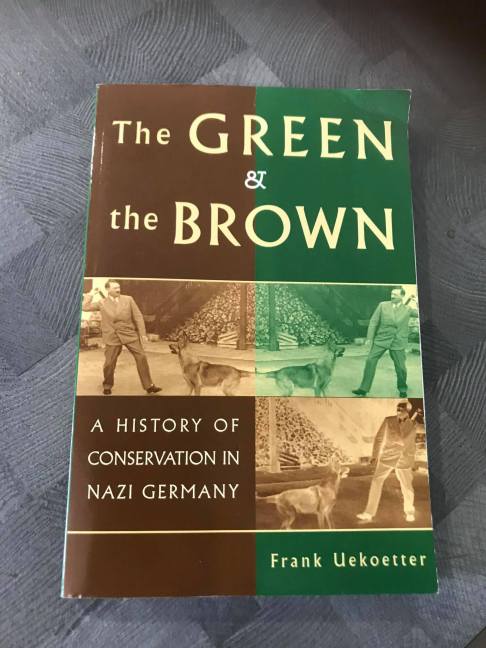 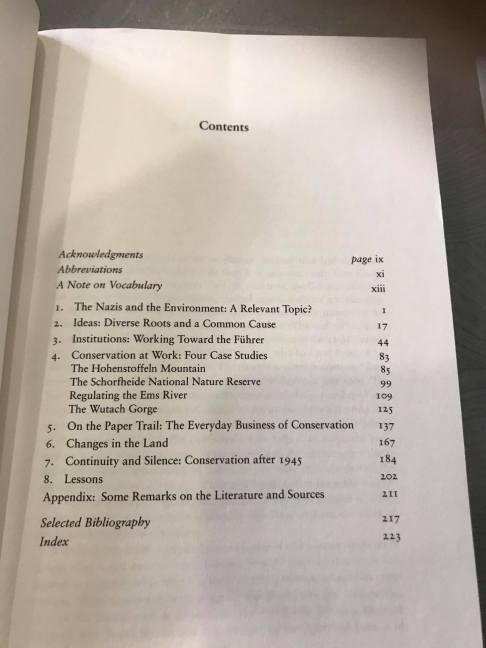 “The Green and Brown” by Dr Frank Uekoetter is an academic oriented book about the history of nature conservation in Nazi Germany. He makes very clear that nature conservation and nature protection are synonyms to him, because they are translated to the same German word: Naturschutz. The history of the conservation movement in Nazi Germany provides a sobering reminder of the extent to which intellectuals can be seduced to find opportunities in any political regime. Although important nature conservation laws (e.g. the national conservation law of 1935) were established during the 12 year long rule of Nazi Germany, the conservationists were already advocating for nature protection before the Nazis came to power, and they were mostly high-educated people. Although some might be firm believers of Nazi ideology, many were probably opportunists. The way how politics worked in Nazi Germany could be summarised by the expression that everyone tried to ‘work towards the Fuhrer‘ and would adopt its initiatives to get the recognition.

As Frank wrote: “After all, conservation was neither an invention of the Nazis nor a German peculiarity. Like most of its European counterparts, the German conservation movement emerged in the late nineteenth century, when industrialisation and urbanization led to a massive transformation of the natural environment, and conservation had become a fixture in most European countries long before the Nazis’ rise to power.”

(Some small thought and note to myself: Japan was very late in its industrialization, compared with Europe. So the first environmental movements in Japan, I know were ‘founded’ in the 1970s-1980s. Also shinrin-yoku came only as an answer in the 1980s, because industrialisation and urbanisation transformed Japan’s lanscape and people in the decades before.)

After the defeat of the nazis, the German conservationists found arguments to keep conservation on the agenda. So a bit opportunist. I have to say that some days ago I had also a talk with team members of a ‘bio art project’ about the ‘ideologies’ after sustainability. Is it ok to write political parties to disseminate some messages about sustainable development? I discovered to my surprise that other team members had perhaps different political convictions, or that their family at least. So they did not want to be affiliated, wanted this project to stay neutral. But I think any topic has a political dimension. I had to admit I had only some political parties in my mind, as their agenda resonated with my agenda. But it was decided if we write to political parties, we should write to them all. I got the task to design mails adapted to each political agenda and I have to admit I feel a big wannabe-opportunist. I haven’t start writing. I think that is why the book came back into my mind (when I was actually walking in the forest of my Heimat, or what’s today my Heimat. For an unrooted person, the concept of Heimat can feel sometimes painful.

During Nazi’s reign, countless books and articles explained how Germany’s strength hinged on its rootedness in the land, all while the intensification of agricultural production and the hasty buildup of industry in preparation for war were changing the face of the beloved Heimat. In the past 10 weeks, I reconnected with Belgium and I enjoy to learn about the indigenous plants and other beings. I talk to willows and beech and study dandelions and nettles. I know some local forestry groups want to restore some ‘nature’ and bring it back to its original state. I discovered a local project which used to be mostly heathland, but became a pine forest under human intervention. This region used to be isolated, until the first canals came and connected this region with the mining industry. So many pine trees were planted. In this project, they want more ‘indigenous trees’, like rowan and birch. My family also got advised to only select indigenous trees for our restoration project.

Exotic species in your Heimat (you see where I am heading too?)

But in the last 10 weeks, I also thought about exotic species. During a long time in nature in Belgium, I found to my surprise my friend Kumazasa, the bamboo I encountered in Japan. In our garden, for an unknown reason and almost in a mysterious way, a princess tree started to sprout in front of our back door. It is an extremely fast-growing tree, and is a persistent exotic invasive. It is far enough of our reforestation project, so the local foresters told us it is ok to keep it. I was relieved, because there is a nice story about. In Japan, the tree is planted at the birth of a girl. The fast-growing tree matures when she does. When she is eligible for marriage the tree is cut down and carved into wooden articles for her dowry. Carving the wood of Paulownia is an art form in Japan. In legend, it is said that the phoenix will land only on this tree, and only when a good ruler is in power. I felt the seed traveled with me from Japan to Belgium. Perhaps I cut it when I marry. I always wanted a wooden wedding ring.

Anyway, I know some exotics are invasive. They can reduce the number of indigenous people. I mean plants. Humans have this big idea of ‘survival of the collective’. This is clear in the times of corona. It’s also clear that the collective can be defined very differently. Some plants and people do not belong on this soil… because they were not original here and/or would outnumber the others, as they procreate faster or in bigger amounts?

Nowadays, some politicians are using the corona measures to stop immigration procedures. I am a privileged woman, who can change from Heimat easily, but many people want to immigrate, because of terrible conditions in their Heimat. They unroot from poor, polluted and poisonous soil, hoping to root somewhere else, in what looks like richer and healthier soil. In addition, there are also people and plants with roots in rich, healthy soils trying to overtake land of people and plants, who have less privileges and land. That’s not called rooting, but colonisation.

So yes, the important message for me on VE-day is the following:

Blogging about ‘brown politics’ is a difficult, and even disturbing, but I believe at VE day it is important to remember the political dimensions behind projects you engage with. History showed that nature lovers can be believers, opportunists, or in case of Soviet Union (to give an example) victims. Where are you and what are you today?