Some weeks ago I visited Okinawa, the subtropical island of Japan which is famous to count the most centenarians per capita in whole the world.

Why do people get so old? – the diet

I noticed indeed that the citizens seem to be more relaxed and really enjoy the good life (and all the American influenced food and drinks unfortunately too). I enjoyed myself with getting massages, walking and wandering around and joining Japanese ladies from my guest house to dive into Okinawa’s soba and beer. These Japanese bonvivants introduced me to the expression shiawase butori, which means happily plump.

At some point we were not that far from Ogimi, which is famous for the high amount of 100 year old people in the world. According to some experts it is because of a certain diet… which is not the food that you find in many restaurants in current Okinawa. That Blue Seal ice-cream will not make you 100 year old. I think that the American occupation since the Second World War until some decades ago broke some healthy lifestyle aspects of Okinawa. However, I found also sometimes places where they serve the healthy traditional Okinawa food: 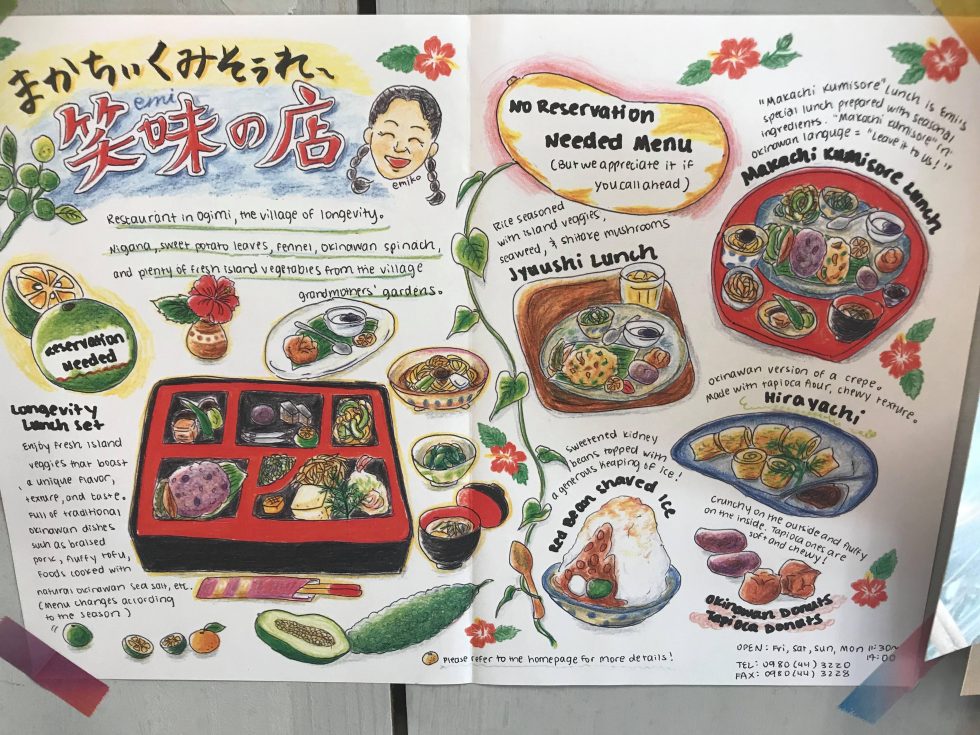 Why do people get so old? – ikigai

I think it is more than just the right diet. It is a combination of their lifestyle, in combination with the weather, the fact that medical world progressed,

the fact that Japan’s economy progressed, maybe because there are so many turtles in Okinawa, the symbol for longevity and wealth…

and  the fact that they keep working because they found/know their ikigai.

If you want to know more, some people wrote books or internet blogs about it,
probably also in your mother tongue too. I will illustrate what ikigai can mean.

This old man’s calling and ikigai

One morning, my friendl and I experienced a outrigger sailing cano adventure, organized by Tom, in the turquoise blue waters of Okinawa, a subtropical island of Japan. After a typhoon damaged the boat, Tom decided it was time to repair and fix his cano after 7 years for six months. When I found him through AirBnb experience, I read he would offer experiences from May onwards. It was end of April when my friend and I were in Okinawa. You do not get things if you keep silent, so I wrote him and that motivated him to get the last things done. We had to wait for the weather, if there was enough wind etc, but it all worked out for us. Just before the trip, he thanked us for motivating him to finish this earlier.

One thing about outrigger sailing canoes: these boats do not have a rudder, so you need a pedal to steer the boat.

He made the cano himself and it took him 18 months (he did not work full time) and used a manual for outrigger canoes. His cano is also bigger. He used cedar wood, which is a very present tree in Japan. He used the Polynesian placemats that his father gave him once as a present … because for what else to use them?
While the sea breeze played with our hair and I felt the sun tickling my face, he explained my friend and me how he and his wife got in Okinawa. After living for 28 years in Yokohama region, his wife and he felt it was time to move to a space where they wanted to live until the end. It has to be close at the ocean and it has to be warm. They thought about many options like the Philippines and Indonesia but could not figure it out in the next months. They needed a place where they also could start a business and learning a language to do business takes too much time.

During a church mass, while they were singing, he thought to move to Chiba close to Tokyo which has an ocean but was cold.
Suddenly a voice told him to consider Okinawa. He never has been there but this voice felt very powerful. After the mass he told his wife about this mystical experience and she also said a voice has told her to also move to Okinawa. They checked out the place and knew this God chosen place was gonna be their new home. They live and work here happily (but not happily plump) for already 8-9 years.

Why do people get so old? – Moai

I had already read about the moai, or strong relationships between them, as I joined a small PhD team research about social acceptance of internal immigrants in the rural mountainous villages in the north of Nagoya. In Okinawa, they say it is stronger. It was maybe not surprising that my friend and I got promptly invited by this bunch of men, who were mostly employees of Orion, the local beer factory, to join their food festivity (to celebrate the start of Golden Week, we assume). They seemed fun and it was outside, so …  why not?

But what are moais?

Moais came to existence in more difficult times, when farmers helped each other by exchanging information  about the best cultivation practicies or also to help each other when the harvest failed. The members of a moai gave monthly a fixed membership fee to a shared pot, which sponsored the meetings and the meals. To have a feeling to belong somewhere and support each other gives some security and contributes to stay longer young.

Last, but not least, Okinawa has tree trolls!

My inner child always comes alive when I find nice folk stories, myths and fables about trolls and fairies.

They live in banyan trees, also called the tree of happiness, or the tree that walks, because the aerial root grows into a trunk and gradually moves itself from

its original position over a long period of time. These trees were planted for windbreaks (there are big typhoons here) and residential use. But yes some people burn incense and pray under the tree, because they believe in the tree spirits.

Listening to these stories, it reminds you that cherishing your the inner child also keeps you long forever:

This is what I found on-line about the tree trolls of Okinawa:

Mischievous by nature, kijimuna are known to play tricks on humans; one of the most common involves laying on the chest of human during sleep, making them immobile and unable to breathe (kanashibari; sleep demons associated with sleep paralysis are common among Japanese yōkai). Kijimuna, much like other yōkai, are often associated with mysterious fires and have been seen covered in ghostly flames running along beaches or riverbanks. If one were to wake up and discover a paper lantern missing, it’s quite possible a kijimuna hijacked it in the middle of the night and ran off. Kijimuna hate octopus above all else. So keeping an octopus around is the best way to ward off any potential attacks or hijinks from a bored kijimuna on the prowl.

Despite such devious tricks, kijimuna are generally good at heart and also known to befriend humans. Such friendships, however, are relatively short-lived due to the puckish and jealous nature of kijimuna. Known to be excellent fishermen, if a kijimuna really likes a human they’ll give fishing tips and perhaps even offer the bodies of the fish they’ve caught—after eating out the fish’s eyeballs, of course. Yet, if a human doesn’t offer gratitude and gifts in exchange for a kijimuna’s kindness, the kijimuna will soon lash out, behaving in a childish manner and bring the friendship to an abrupt end.

Like many of the numerous yōkai in Japanese folklore, kijimuna are an essential part of the Okinawan lifestyle. Tales of kijimuna have been passed on from generation to generation for centuries. Nearly every Okinawan young and old can happily rattle off a kijimuna folktale from memory. Images of kijimuna can be found all over the island (check, I have a whole bunch of photos of them now) and have even invaded popular culture in the form of anime and manga characters. So they next time you come across a hyperactive, orange-haired fairy with with an oversized head and hands, you’ll know it’s a kijimuna.

I have a feeling I might return to Okinawa, or for sure to the other southern islands of Japan ;). I am very intrigued by  Yakushima, the mystical island that inspired Ghibli Stidio makers for princess Mononoke, counts many thousand year old trees and had good hikes.